Watering: get the basics right 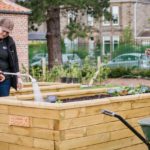 Watering is gardening’s most basic task, in every sense of the word. It’s always needed at some point, no matter what the garden. Watering is really a very simple task, however so often it is under-watering or over-watering that can cause our plants to suffer and even die.

All plants need water, even the drought tolerant ones, but the volume and frequency of that watering varies hugely from plant to plant. The first thing to consider is where the plant is originally from (and I don’t mean the garden centre – but where around the world do its ancestors live)? If you know what kind of environment your plants descend from, replicating that as closely as possible when you care for it will bring the most success.

If you’re not sure about your plants’ origins, the leaves will give a good indication of what it needs. Narrow, silvery/white or fleshy leaves show it is adapted to minimise water loss or store water for long periods, so it is from a hot area with little rainfall. Wide or large, green, thin leaves indicate it is not used to being without water for very long, so it will need more watering in dry periods.

Raised beds such as those supplied by WoodBlocX can make watering plants much easier. The soil you put in them can be adapted to the planting; for example, gravel can be mixed in to mimic the free-draining soils most Mediterranean herbs such as lavender and thyme are used to. The watering itself is easier because the soil level is lifted off the ground, meaning less stooping with a heavy watering can and it’s much easier to get the water directly to the soil (see below). Alternatively, raised beds lend themselves very well to the installation of automatic irrigation systems – from the high tech to the simple leaky hose attached to a water butt.

Always check the moisture level in the soil before beginning to water, because a dry dusty surface may actually be moist further down, or vice versa. Sticking your finger in the soil is the only way to find out! However and how often you are watering, it’s important to water in the morning or evening. Watering in the middle of the day is a waste of time – most of the water you apply will evaporate before it even gets to the roots, and on really hot days, before it even hits the ground! The cool of the morning and evening means the water has a chance to penetrate the soil.

That said, in very dry and hot weather, it may be necessary to water plants that are drying out too fast in order to save them, but always check the soil first. Some plants will flag in the midday sun, looking as if they are wilting and dying, but in fact they have enough water in the soil – it’s just a temporary mechanism to prevent too much water loss.

Always give your plants a really good soak when you water them, rather than just a sprinkle over the top. Not only does this mean you have to water less often, it will also encourage the roots to grow down into the soil, rather than up to the surface where they will then dry out faster anyway. Make sure the water is going on to the soil rather than the foliage as much as possible as well – this will ensure it gets to the roots where it is needed, and not create a humid atmosphere around the plant which can encourage disease. Follow these simple steps and your plants will thank you for it.