This entry was posted on 22nd March 2018 by WoodBlocX. 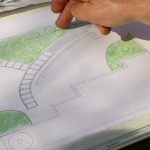 In 2016 Glenn and Zoe Crockford appeared on the BBC's ‘Big Dreams   Small Spaces’ television programme with Monty Don. The couple opted to use our modular system throughout their redesign; see how they transformed their garden and how they found using WoodBlocX for their project.

Tell us about your garden before its transformation

When we first moved into our house the garden was probably the worst feature. It was incredibly steep, featureless and had very little level ground. There was a path running across the garden, which ended half-way at nothing. The grass was a nightmare to mow and quite dangerous. We had both slipped down the slope several times on our way to the compost bins. We knew we had to change it but didn’t really know how, when or what we could achieve.

How did you get started with your plans and what was the inspiration?

Garden design is not something either of us had done before. Our initial plans were very simplistic and we took the easy option and went with the existing landscape. We were pretty naive and spent a lot of time drawing and redrawing ideas. We made a basic scale drawing which we copied and kept drafting onto. Lots of discussion was key. We collected ideas via Pinterest which really helped. Our other big incentive was that we were getting married in the October and had talked about growing flowers to have at our wedding. Luckily for us we ended up with enough flowers for the whole thing!

Monty Don helped with the planning, what advice did he give you that stuck with you throughout the makeover?

His most valuable piece of advice was that we didn’t have to stick with anything that was already there and that we had a chance to totally change the layout of our garden. He gave us the push to start again, be braver and to imagine our garden as a blank canvas. Which we did. We totally changed our plan, even ignoring some of Monty’s suggestions. Ultimately, he said, it was our garden and we had to make it work for us. He also gave us really sound advice with planning the planting. I had gone overboard with planting lists, like a child in a sweetshop. I wanted everything I had ever seen that was pretty, but realistically that was never going to work.

You included several WoodBlocX raised beds and steps within the design, what made you take the decision to use WoodBlocX?

We decided against wooden sleepers as they were so impractical given our situation. They would also have added too much depth to the beds and we wanted to maximise the space. Glenn was searching for small sleepers online and found a photo on Pinterest of someone using WoodBlocX. The photo was linked to the YouTube footage of ‘Dragon’s Den’ and from there the rest was easy. Glenn did massive amounts of research into whether we could make it fit our garden, and then actually make it. We quickly realised it was our best option.

How did you find building the structures?

It was fantastically easy; the design appeared online to be straightforward to build and it almost seemed too good to be true that it all arrived and fitted together. We had to make a couple of small adjustments due to the horrendous chalk layer that runs through the garden and which caused some digging issues. However, this gave us some spares which came in very handy as we managed to build a set of steps the entire length of the garden. The contact and support we had from WoodBlocX was brilliant and we felt very well looked after.

The WoodBlocX raised beds have now been in place for two years, how has the garden evolved since then?

The WoodBlocX beds are fantastic. The wood has weathered a little but is still a lovely honey colour. Everything is as sturdy as the day we built it. The garden has really come on since we first planted it out and changes every year as we continue to tweak it. It's been wonderful to see it coming into its' own and marvelling at how the perennials come back bigger and better each year. At the time we didn’t realise it, but we have two beds which are a perfect height and depth to maintain and we can get to all aspects of the garden really easily.

With Easter a just a week away there is no better time to make plans for your garden.

If you would like to transform your garden, simply get in touch with us and our team of in-house designers will create a FREE design that is completely bespoke to your garden. Your garden could even be transformed in time for the May Bank Holiday weekend!